Project 2012/13 started as a thought. Playing around with functions in the computer programming while deciding where I am heading next. My exhibitions have always had a theme, but were more journalistic in style presenting a case or a slice of history. 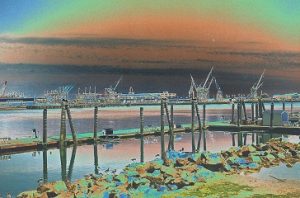 Looking back, my images have been good as a series but rarely were they good enough to ‘stand alone’. The function testing came as a result of a digital tutorial session at the Isle of Wight Photographic Society which piqued my interest enough to give it a go. Working on the images that I took on that trip to the isle, I ended up with some interesting results. One image – The Chain Gang – I decided to enter into the next IoWPS Open Competition. It got the full 10 point maximum score and got third place. Another – Neon Camera (which I renamed ‘Caught on Camera’ for the IoWPS) got joint Second in the IoWPS Creative Image Of The Year competition. This caused a bit of a surprise, but was well received.

The Hampstead Photographic Society had a couple of members singing Hallelujah that someone had the courage to break the mould of classic photography and enter heavily worked on images. They promptly (in their own style) also started being more creative. Out of six images entered over two open competitions, Stairwell got 17/20, Tree on Mount Hermon got 18/20 Chain Gang and Neon Camera got 19/20, Portsmouth Harbour Train Station got 20/20 and Tel Aviv Beach Hut fell at 14/20 (which I understood as projected shows faults that are not seen on a computer screen or A4 print). Other members got quite revolting accusing judges of being bad and me behaving like a child that has only just discovered computers and having my two weeks worth of fun. I was expecting some negativity, but not personal. Against the images yes, but not against anyone personally, no ! It was at the insistence of the Chairman of the HPS that three of my images went into the 75th Anniversary Exhibition – so I chose Portsmouth Harbour Train Station, Tree on Mount Hermon and Chain Gang. 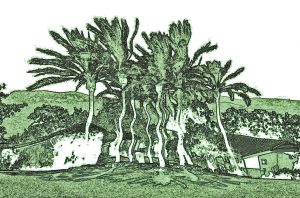 Outside the Camera Club scene, my confidence grew as at an Arts & Crafts Fair in North London, Chain Gang and Portsmouth Harbour Train Station both sold in mounted print version while a number of others sold in greetings card version.

As a side issue to my photography, I have been involved with a couple of English Language poetry groups in Israel. One of them – Cyclamens and Swords, made a call-out for photography and art-work for their August 2012 issue. I entered six – Chain Gang, Portsmouth Harbour Train Station, Neon Camera, Tree on Mount Hermon, Los Angeles Harbour and Lamp and Shadow. They all got accepted.

Obviously at this point, with this short but encouraging history I am now going out on fishing expeditions. I have already approached one gallery in St. Johns’ Wood (London NW8) with the idea and will soon start approaching others. Of course I cannot expect ‘YES’ all the way along, but would dearly enjoy the prospect of a good showing.

I have entered a number of images into competitions in the Hampstead Photographic Society and the Isle of Wight Photographic Society, with some getting good responses from judges while other have had puritan judges climbing the walls in disgust. In the 2011/12 and 2012/13 seasons, I did manage a couple of top three finishes in the End of Year competitions in the Isle of Wight, but the 2013/14 season saw a huge improvement. My distorted image of Sandown achieved ‘Runner Up’ in the Projected Landscape Image of the Year category in the Isle of Wight, while in Hampstead, I achieved first place in the same category with the same image.

Although I am looking for a new way of dealing with my images, I am still using Project 2012/14 images – especially when it comes to print sales and exhibitions. The image Birds On A Wire I admit to having used a few times and has been better to me than I thought – including being accepted into the Lublin PS online gallery in Poland (07/2013) the 39th Smethwick International Exhibition (01/2014) and now with the Light, Space & Time Online Gallery (02/2015) from whom I received an award in the Special Merit Category.